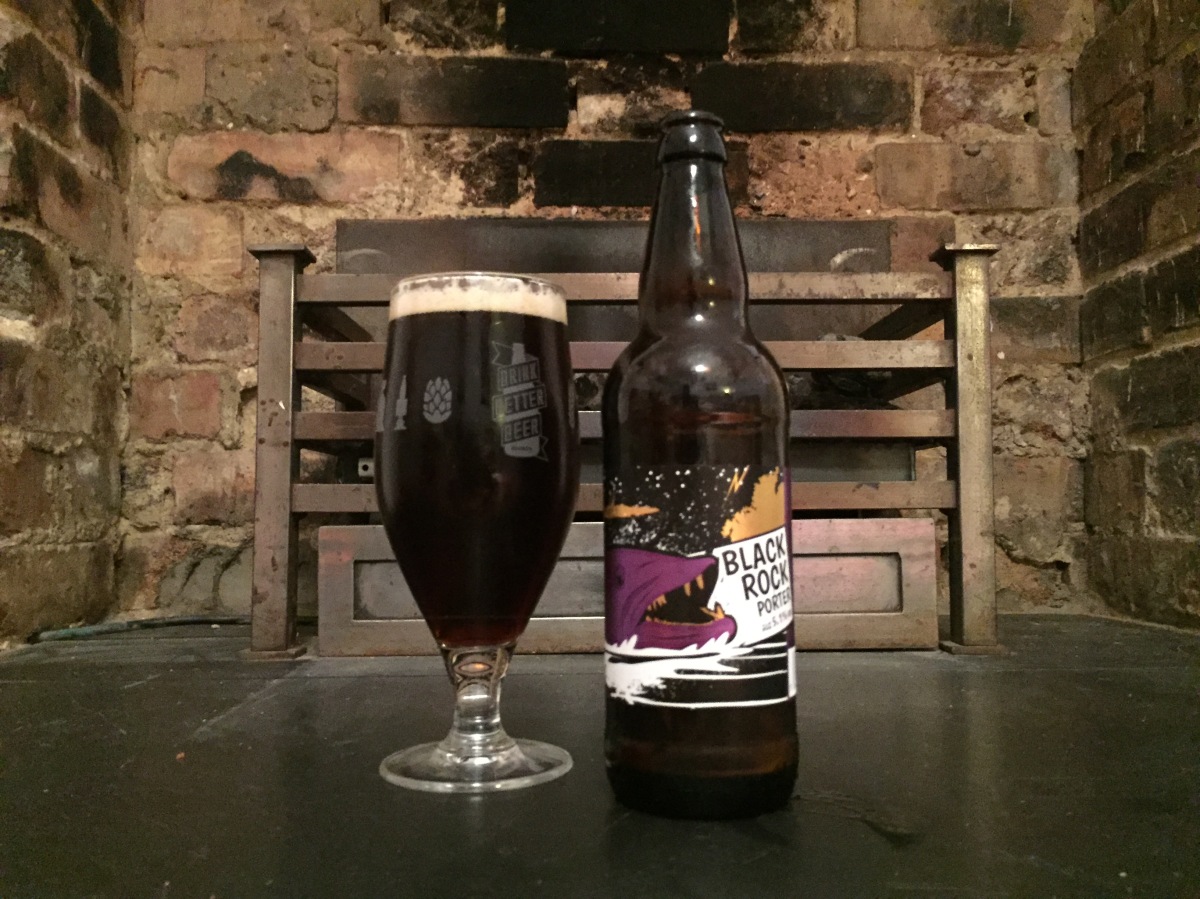 You too can sign up for #CraftBeerHour samples right here 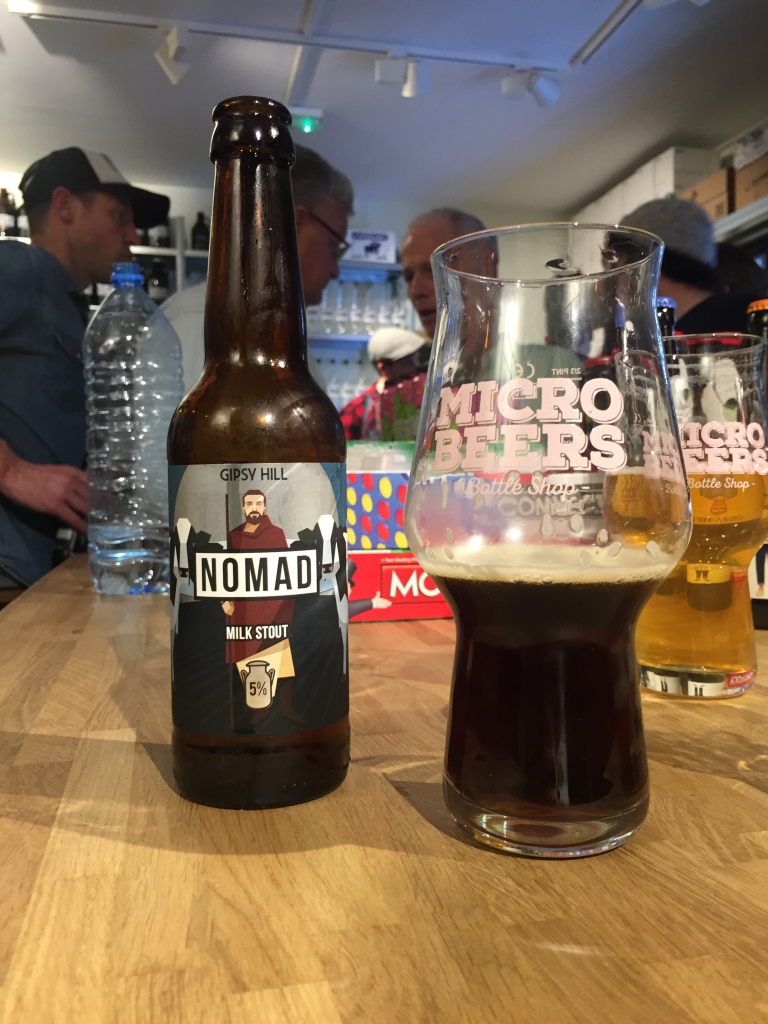 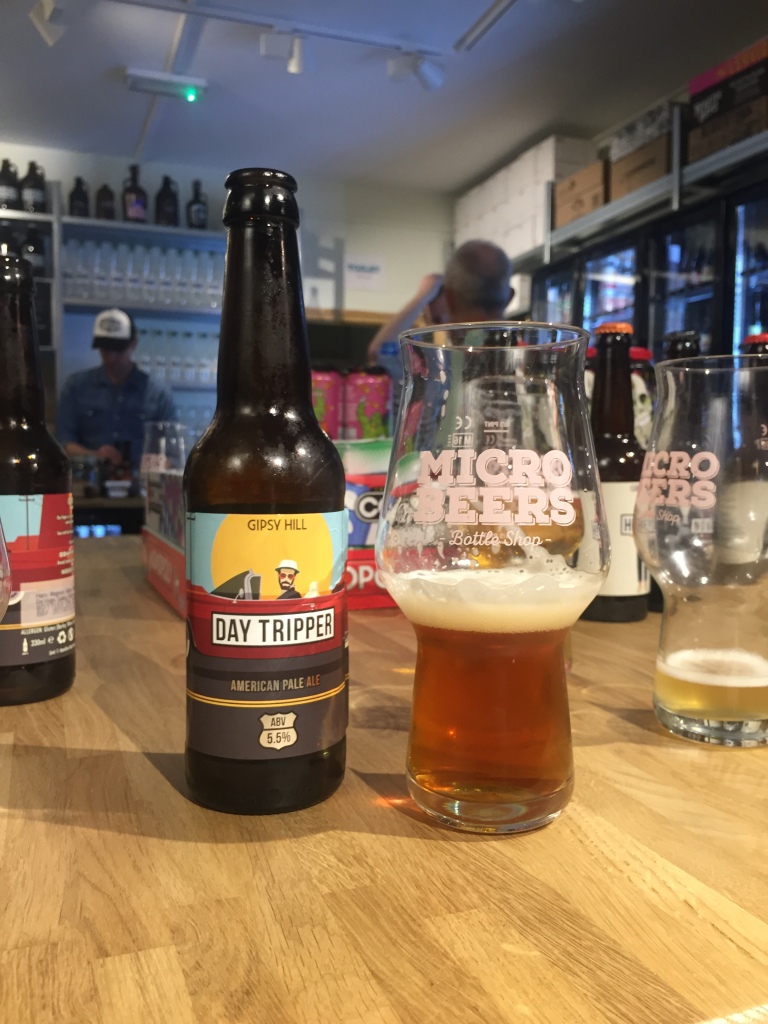 One thing I got a chuckle out of is the ‘contract brewed’ gag. But openly talking about contract brewing seems rare in the UK, or is it that it’s just not that common? Five Points Brewing Co announced in their year-end blog that they were contract brewing some (only Kegs, cans are brewed and packaged at Five Points) of its Pils beer to a ‘family owned, independent brewery in Belgium’, in an arrangement reminiscent of Camden Town’s. I can understand their rationale too, which is outlined in the blog, but can be summarised as “At Hackney Downs we are hemmed in on all sides, and after several months of (currently unsuccessful) negotiation with our neighbours and with Network Rail, sadly it looks like we’ve run out of expansion options at our current site”. But surely 5 Points aren’t the only ones with this problem? That sounds like any typical craft brewer, in an industrial estate or in a railway arch – hemmed in – waiting for an opportunity for a close or woe-betide adjacent lot to become available. Often this leads to inefficiency, such as taking an hour to unpack assorted brewery paraphernalia only to spend the same amount of time repacking it that same evening. A quick google search of contract brewers in the UK reveals a number of options, namely traditional brewers with extra capacity to spare. But again, it’s unclear whether, when faced with barriers to expansion, craft breweries seriously consider contract brewing as another way to grow in the face of barriers to scaling up quickly to meet demand. 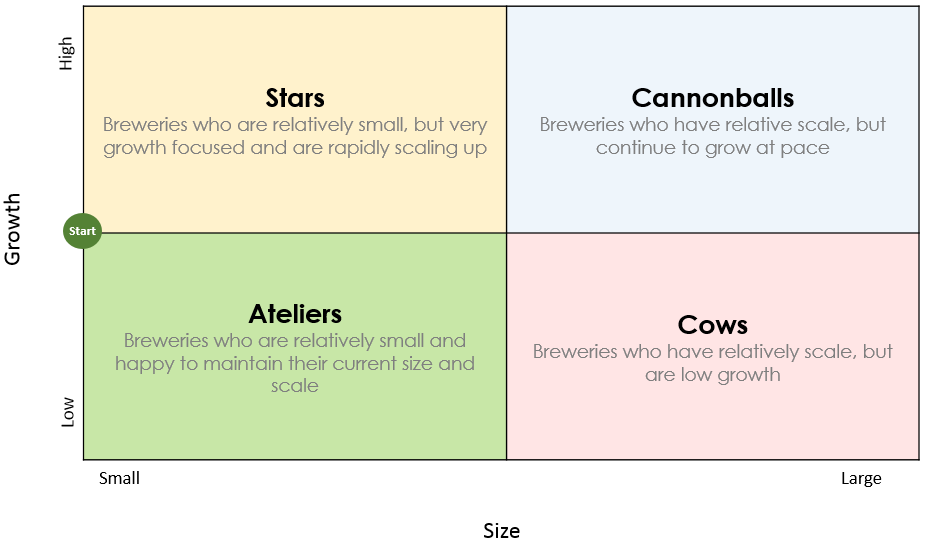 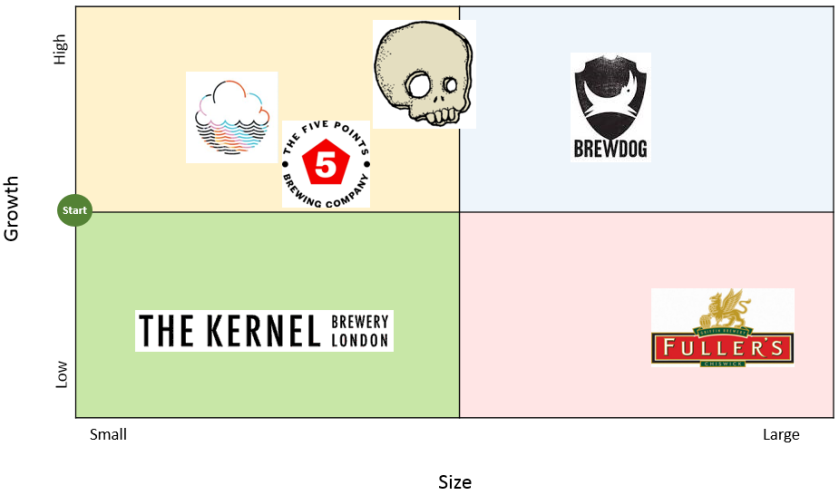 If we start in the bottom left, I’ve dubbed this group the Ateliers. This is breweries that are relatively small in scale and with a low growth profile. The archetype Atelier for me is The Kernel Brewery. I’ve interviewed Evin from The Kernel in a previous podcast and he makes it clear he believes the brewery could be capable of growing to be 15-20 times the size but is happy with the current size of the brewery, the quality of the beers they are making and the conversations he can have with his customers. The key challenge for Ateliers is finding a sustainable differentiator and for The Kernel, this is the stunning quality of their beers. The Stars are those breweries that are relatively small but are going through significant growth. Think Cloudwater, Five Points and Beavertown. Interestingly, they are all going about that growth in slightly different ways. Cloudwater are streamlining beer dispense to just can and keg and focusing on maximising the efficiency of their brewing. Five Points are facing growing pains in their current site and have started contract brewing to increase capacity. Beavertown are maximing their brewing schedule and expanding their current presence with one eye on moving to a big new premises in the near future. For these breweries the key challenge is likely to be managing the financials. When making capital investments a sharp eye on cash flow and expense management is critical. Ensuring the quality and consistency of their beers don’t suffer is another key challenge. The Cannonballs are those that have relative size and are also going through significant growth. BrewDog are the ultimate Cannonballs. They continue to expand their brewing capacity in Ellon, have set out plans to create Overworks, their Sour facility, expanding their bar network both domestically and abroad as well as launching BrewDog USA.  That is a huge agenda and good management, governance and control is critical to ensure they are delivering against all their plans. And finally the Cows. These are relatively large breweries experiencing low growth. Their challenge is how to push the business back into growth mode (or restructure). Whilst I wouldn’t put Fullers into this category (they seem to be focused on expanding their range of pubs), many appear to be responding to this challenge by doing things like rebranding or creating craft ranges to try to tap faster growing segments of the market. Some feel like half-hearted attempts at change given that authentic and sustainable cultural and strategic change takes more than some new packaging. 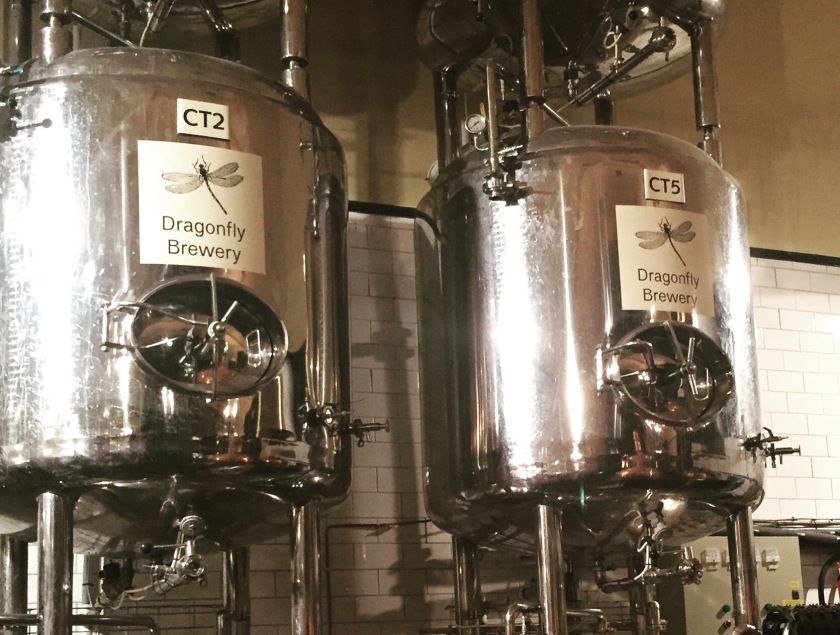 Towards the end of last year I noticed that two of London’s best craft breweries were on the hunt for new brewers; Hackney’s Five Points Brewing Company (I’ll call them Five Points in the rest of this post) and Bermondsey’s Brew By Numbers.

I thought it was odd two craft breweries would be looking for brewers at the same time as they would likely end up competing for the same talent. I reached out to the breweries to get their views on this to help determine whether or not my views were unfounded.

Doreen Joy Barber from the Five Points gave me an insight into their recent hiring activity. ‘Last year, we hired two new brewers into the Five Points fold. One came from another brewery in England, whereas the other had previous brewing experience in the UK’, explains Doreen.

Looking at their existing pool of brewers it’s clear they have appointed talented people with relevant brewing experience. ‘Our former Lead Assistant Brewer who worked with us for two years previously worked at Nogne O (the Norwegian brewery) and BrewFist (the Italian brewery)’ says Doreen.

They have also hired people without brewing experience that are willing to learn. This could be in the form of attending training at the Institute of Brewing and Distilling or through an apprenticeship. Doreen expanded on this, ‘Our new Lead Assistant Brewer went through our apprenticeship that we started with Hackney Community College’. Not only is this a very sensible and structured approach to developing talent, it is a great example of how a brewery connects with it local community and Five Points deserve top marks for an initiative like this.

Chris Hall’s insights on Brew By Numbers indicated a slightly different approach. In their search for brewers, relevant experience with the beer styles they brew is important, as is someone who could bring ‘a fresh perspective, unique insight or otherwise bring a new set of ideas and creativity to the team’.

This is important as it links to Brew By Numbers brewing philosophy. As Chris says ‘It’s a team after all and you want people to think differently, so we can express as best we can the full range of flavours that beer than achieve’.

With so many craft breweries in London, either starting up or facing rapid expansion, it would seem London is as an attractive location for any aspiring craft brewer. Chris again provides further insight on this; ‘We now have employees from England, Canada, United States, Finland, Norway and Italy. People with a brewing background seem to be moving to the UK almost every week’.

And it looks like there continues to be plenty of opportunity for people interested in forging a career in the burgeoning craft beer industry. Since I reached out to Doreen and Chris both Redchurch and Beavertown have also advertised for new brewers, with Beavertown also looking for a host of other roles. Being able to draw not only from talent within the UK scene today but from, as Chris calls it, ‘a diverse melting pot of backgrounds, experience and ideas’ should ensure continuing innovation and creativity in the UK craft beer scene.

One of the big challenges for craft breweries when they do scale up is when the founders or co-founders, who are often used to being very hands on in the brewing side of the business, hire a brewer to help free up their time to enable them to work on the business side. Handing over control for recipes they have designed, and responsibility for producing the beers they have been making for some time can be very tough – in reality it’s a real test their leadership capabilities. Building the right culture in a brewery is almost as important as brewing the beers and crucially is linked to the breweries ability to attract and retain the right talent in the first place.

As it turns out, my initials fears were completely unfounded. London is attracting an array of diverse talent that is helping to drive the innovation, creativity and growth of the UK craft beer scene. Getting some clear, timely and accessible statistics on craft brewery employment to help tell this story would be even better.